The Story of Oregon Aero

Initial customer feedback was positive so Mike continued to improve the SoftTop Headset Cushion. He started adding new designs to be compatible with various headset models. Headset cushions began piling up by the dozens on Mike's kitchen table. Bolts of leather and other materials soon filled the garage. Back in those days, all sewing was done by hand.

From this small beginning grew the company which is today the leader in engineering and manufacturing advanced seating systems for aviation and other industries. Oregon Aero also offers a wide range of additional products and holds dozens of patents.

To this day Oregon Aero's focus remains on the same issues addressed in 1989 with the SoftTop Headset Cushion. And that focus is making the interface between the human body and manufactured hardware pain-free, safer, and quieter.

In Reality, the Roots of Oregon Aero Stretch Much Further Back than 1989

When it comes to designing products and leading Oregon Aero, Mike Dennis does what he has always loved to do—solve problems by thinking about them in new ways.

"Most of the time when we solve a problem, it's because we've turned the problem upside down and not accepted traditional assumptions," says Mike. That way of thinking led to the development of pain-free, safer seating, headgear, and the hundreds of other products he has designed.

Mike Dennis has always been fascinated with airplanes, boats, and machines. He gets his fascination and design skills honestly. His maternal grandfather, Ronald Young of Poulsbo, Washington, designed and built the first automobile ever to appear on the Kitsap Peninsula, around 1914. Ronald Young also designed and built boats by hand, notably the beautiful wooden Poulsbo boat made between 1918 and 1965. Today, Poulsbo boat owners still treasure their craft, which are still being used in the waters of the Pacific Northwest and elsewhere. 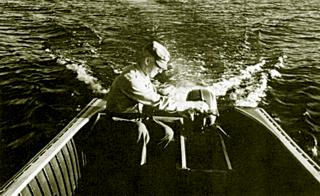 For the Love of Experimentation: Ronald Young experimented with various outboard designs, reversing the traditional tumblehome of the outboard and allowing the lines to flare outward along the sheer. He also tinkered with an inboard well for outboard power, building the well adjacent to the keel. This love of experimentation and looking at designs in a different way has carried through to Mike Dennis and Oregon Aero.

The Poulsbo Boat: Ronald Young, Mike Dennis' maternal grandfather, prepares to deliver two unpainted Poulsbo outboard skiffs, around 1950. Young designed and built these craft by hand. Many of his Poulsbo Boats can still be found in the waters of the Pacific Northwest. 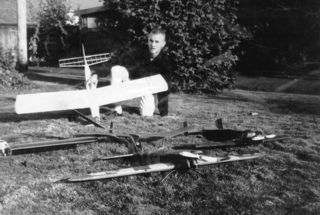 Starting Young: Mike Dennis was fascinated with planes, boats, and machines. Mike, shown here in his front yard with model airplanes at age 16 was already was taking flying lessons. 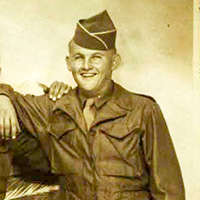 Mike's dad, Jim Dennis, practiced a number of professions; he was a teacher, preacher, and counselor. Jim Dennis was also was an educated speech and hearing therapist. Here is where his genetic links to Oregon Aero grow even more interesting.

"When the thought hits me that I'm following through on work my dad began, it's pretty amazing," notes Mike. "But surprisingly, when I began developing headset and helmet upgrades, I didn't remember he'd worked on aviation helmets. I did remember being ten years old and wearing those helmets to 'fly' around the neighborhood on my bike—I was obsessed with flying airplanes. It was later, after talking with my mother, that I understood better what my dad was doing with the helmets."

Mike remembers a saying his dad liked to recite during his teaching and preaching days: "The brain can perform only as long as the butt can endure." The saying strikes a note of irony, considering Oregon Aero's success in designing painless seating. By eliminating pain, Oregon Aero Seats and Seat Cushion Systems enable people to focus better on the job at hand. Many people have thanked Oregon Aero for saving their butt.

At the age of 19 Mike Dennis achieved his childhood dream. He earned his private pilot's license and soon after, his Airframe and Powerplant license. Little did Mike know, his love of flying—and problem solving—would lead him to create and lead Oregon Aero which offers innovative, breakthrough products to people and companies around the world.

From the beginning Mike followed his own way of thinking. "I don't like being told 'no' or 'it can't be done' or 'it's impossible.' Everything is possible," says Mike. "It's a matter of persevering and being willing to look at solving problems in new ways." In addition to innovative thinking Mike Dennis and Oregon Aero listen to peoples problems and issues. Consequently, Almost every Oregon Aero product begins by listening to customers. Oregon Aero works with many industries, the military, and law enforcement. Mike has also developed a line of innovative health care products.

The history and growth of Oregon Aero are a story of breakthrough thinking, perseverance, listening, and deriving satisfaction from helping people, along with a hearty tip of the hat to genetic predisposition. What may come next in the Oregon Aero story? Mike's not worried. Says the Oregon Aero founder, "There always will be problems to solve—always." 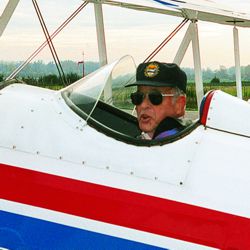 Thanks, Irv: Oregon Aero exists in part because of my good buddy, Irv Allen. He gave me my first flying lesson in 1962 when I was 13 and continued to teach me to my private in 1969. I also worked under Irv to qualify for my A&P rating.

Irv, now deceased, was a huge influence on me and helped my dream of flying become a reality. Even today, Irv is still teaching me—about life as well as flying. Thanks, Irv! — Mike Dennis

"The brain can perform only as long as the butt can endure."—a favorite saying of Jim Dennis, Mike's dad 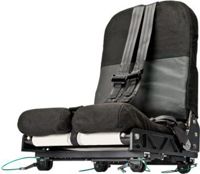 True Innovation: The pain-free, safer Oregon Aero® High-G® Seat is an example of true innovation resulting from Mike Dennis' breakthrough thinking. The Seat complies with applicable FAA regulations. Its modular design can be engineered for a broad spectrum of applications such as aircraft, high-speed boats, land vehicles, and other seating applications. Shown here is the High-G Seat modified for the U.S. Military H-65 Rescue Swimmer crew position. 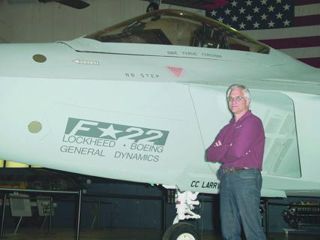 From Headsets to Fighter Jets: Mike Dennis stands with the F-22 Raptor Stealth Fighter prototype at the USAF Museum, Wright-Patterson AFB. Oregon Aero designed and manufactured the aircraft's ejection seat cushion system. From the development of an aviation headset cushion to engineering advanced seating systems, Mike Dennis and Oregon Aero have focused on making the interface between the human body and manufactured hardware pain-free, safer and quieter.

A letter from Mike and Jude :Previous     Next: Mission and Core Values